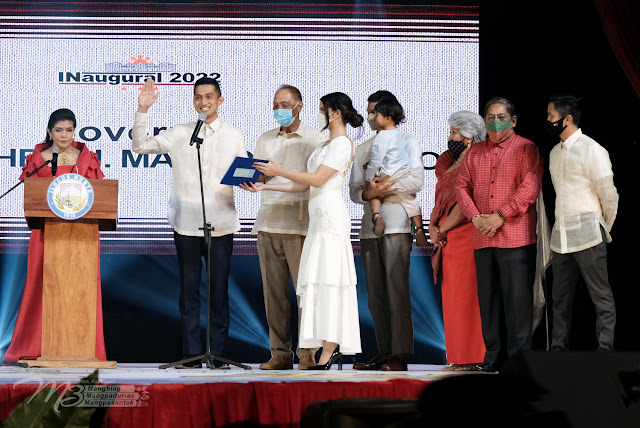 LAOAG CITY – Reelected Ilocos Norte Governor Matthew Joseph M. Manotoc vowed to continue programs he started during his first term but on a much grander scale.

https://www.blogger.com/video.g?token=AD6v5dzaA6oSeaUfiMjeFN3NmX_dvzdyZrZSa7PMdLidtXedOBT4Dwv3Si8akHwbRahc6h5WxjVCrap8u5Eq_BwCwEXKk6l0o_l4AeEU4Lld8BECg56tfcxWPvmAdtwhFQVMRYD6PSJUIn his speech during the formal presentation of documents for turnover at the Sangguniang Panlalawigan, Manotoc said that while expectations are high for the province of Ilocos Norte and its new set of leaders, he sees no problem achieving their goals, especially under the incoming administration of his uncle President Ferdinand “Bongbong” R. Marcos Jr.

“We have the national government on our side. So, let us capitalize on the moment. We are at the forefront of the Philippines and everybody is looking at us. Let us make our president and our province mates proud,” Manotoc told the transition team and the department heads.

He said he will push for agriculture modernization, tourism investments as well as manufacturing and product processing to generate more jobs and livelihood.

“There had been a lot of delayed projects because of the pandemic. I hope we won’t be distracted by COVID too much,” he said.

In the past two years, the Ilocos Norte government has allocated a total of PHP562 million for agricultural machinery, equipment, and inputs. These include the construction of 272 small farm reservoirs, five small water impounding projects, 10 multi-purpose drying pavements, 64 tractors, eight combine harvesters, and 12 tobacco curing barns.

While encouraging more farmers to shift to high-value crops such as garlic, mango, dragon fruit, shallots, onions, and tobacco which are more marketable than palay, Manotoc assured all farmer-cooperators that they will be given full-service assistance, from pre-planting to marketing their produce.

His mother, three-term Ilocos Norte Governor, now Senator, Imee R. Marcos, administered his oath, as he was surrounded by family members who served as witnesses.

“Almost three years have passed since I took my oath as your governor. In that same year, we found our province ravaged by a tropical storm and not long after we were confronted by a pandemic like no other. But we have come a long, long way since then,” he remarked.

In 2019, Ilocos Norte recorded over PHP1.1 billion in damage after tropical storm “Ineng” battered the province. Meanwhile, the onset of the COVID-19 pandemic has caused a massive blow across all sectors across the world.

Implying the “safer and stronger” core message of the address that he delivered earlier this year, Manotoc again stressed the importance of increasing various forms of investments to enliven and boost Ilocos Norte’s two economic powerhouses, agriculture and tourism.

Moreover, his initiatives for these sectors are in consonance with continuing programs of the provincial government in trade and livelihood, the health system, high-impact infrastructure, the youth population, and education, among others.

Manotoc won his second term after recording an overwhelming victory in this year’s polls. (Leilanie G. Adriano, with a report from PGIN-CMO)