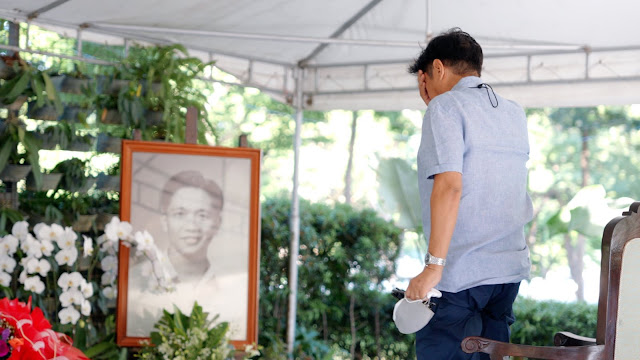 FERDINAND Marcos Jr. the newly-sworn in president of the Philippines won the presidency by a landslide. To some people in the United States, countries in Western Europe, and Japan, this is difficult to imagine as the only “news” they have been receiving from the mainstream media and social media have been that of a dictator, Imelda’s shoe collection, and martial law. To the majority of Filipinos, especially to those 31 million voters who voted for him, Ferdinand Jr, or BBM as he is affectionately called, is someone whom they have been waiting for. I will refrain from using the term “God-send” but judging from voters’ comments online that’s actually how many of them feel. Young and old alike, those inside the country as well as those working in faraway places such as those young staff I met on the Viking Cruise exhibit such fondness and optimism.

So why such sentiments ? Perhaps we should go back and take a look at BBM’s parents and what they did when they were residents of Malacañang  Palace, the official residence of Philippine presidents.

The late President Ferdinand Marcos Sr. was an achiever and his wife Imelda (please detach the shoe collection from your minds for a while) was the same though in different ways. Ferdinand Edralin Marcos was from the Ilocos region of northern Luzon. He came from a people known for their diligence, ambition, resilience, pragmatism, and frugality. He grew up in a town that was burned down by the Americans in 1900 when the townsfolk resisted and  put up a big fight against  the Americans who were about to take over. The town has had a history of nurturing leaders—not just the “run of the mill” leaders but the brave and heroic ones who took risks and made a difference: a bishop who could not tolerate the abuses of the Spanish clergy broke away from the Roman Catholic Church and founded the Philippine Independent Church, a general who refused to bow and salute the new colonizers from the mighty United States of America who just defeated the Spanish Navy on Manila Bay. He came from a place where a series of revolts against Spain took place, a place where people did not and do not put up with the mundane. And most of all, it was and is a place where loyalty is fierce.

A visionary, Ferdinand Sr. established through  Presidential decrees, the Philippine Heart Center in 1975 and the Philippine Lung Center in 1981 which were the firsts of their kind in Asia at the time. The Children’s Medical Center was established through another Presidential decree in 1979.  Next to his health policy was education—he “brought” (aka extended)  the state universities to the provinces. Existing public colleges and universities in provincial capitals all over the archipelago were incorporated with the state university in Manila, the University of the Philippines. The Marcos presidency facilitated an aggressive infrastructure program of expressways, local airports and with this,  brought the remote villages closer to the big towns and cities. Another interesting and beneficial project was the Masagana 99, an agriculture program that boosted rice production, elevating the incomes of rice farmers which resulted in their higher  standard of living

BBM’s mother, the former First Lady Imelda Romualdez Marcos, who later became the Governor of Metro Manila, came from Leyte in the Visayan region in the South. She came from a people whose culture differs immensely  from that of the Ilocanos. The late historian, essayist and poet Teodoro Agoncillo wrote that the “Visayan is happy-go-lucky and is more interested in the here and now than in the past or the future… that the Visayan exceeds the Tagalog’s for the finer things in life, so much so that he is ready to spend his last peso for these.”

Such graphic description allows us to take a peek into Mrs. Marcos’ innermost thoughts and her desire to take on projects  like the Cultural Center of the Philippines, the beautification of Manila, highways, park, towns and barangays.  “Beautiful things and places” were always in her sight and was of course criticized  for having such an outlook. But in the end, people actually enjoyed the improvements that she undertook to accomplish. She was also responsible for bringing electricity to the neglected remote parts of Mindanao and extended peace to the Muslims there by helping build several mosques. To help quell the Muslim insurgency in Mindanao,  she traveled to Libya and begged the former Libyan president Qaddafi to stop sending arms and weapons to the rebels. It was a diplomatic feat. Although the  media  reported all of these, they were often  juxtaposed with stories of her lavish lifestyle and overspending. What stuck in people’s psyche with  “help” from the media would always be the shoe collection so that these worthy achievements were completely ignored. The recurring media motif of “grand shoe collection,” hidden wealth, dissenters being interrogated, made good optics for the oppositionist’s western “audience” and provided anti-Marcos groups fodder for attacks.

It’s worth noting that the Marcos era was a time of upheaval: the Vietnam War that inspired and instigated violent student demonstrations; the Communist-inspired insurgency; the massive incursion of guns from Red China; the Muslim rebels in Mindanao;  local politicians with private armies who acted like they were above the law—even burning a barrio to the ground because these folks did not vote “correctly and properly.”   A road or a bridge that could not be built because a local politician  pocketed public funds for his private use. It was a difficult time that sowed the seeds of discontent, anger, and malice that would usher in the implementation of Martial Law. Whether Martial Law was good for the country or not is up for debate. I left the Philippines in 1972, just a couple of months before Martial Law was declared. My husband Philip and I returned for a visit in 1977. To Philip and I, it was a breath of fresh air: the Customs officials at the airport were more efficient and disciplined; the taxi driver in Manila that ferried us around seemed more honest; the streets were cleaner and there was no odor in the air; the roads and bridges were in better condition. There was a feeling of safety all around. To be fair, I am not trying to negate what others say about their loss of “freedom” and the hardships they had to endure during Martial Law. There were those who thought the country was being driven to the wrong direction and they expressed it so. And there were also those whose young minds that lacked direction were easily  hijacked by opportunists who were power-hungry.  I am aware that by enumerating the achievements of the Marcos’ presidency, I may be upsetting some very good people. But I just want to provide some sort of context and perspective—that there was more to the martial law and the grand shoe collection…that there was a side which a lot of people are neither aware of or have chosen to ignore. And until one is reconciled to this side, one may end up relegating his/her  own countrymen as stupid for electing a former “dictator’s ” son. BBM needs to be given the chance to exhibit that he  is able to lead the country through the next six years. A unified country can help him accomplish what needs to be done: return the Philippines on the world stage ready to eclipse or even surpass her Southeast Asian neighbors in good governance, finance, and education. To  achieve this,  multiple voices must  be allowed to continue challenging the power structure as these  “multiple voices” may bring good ideas to the table.

So… when friends and acquaintances in our international community in the Washington DC area ask how and why a “dictator’s” son could win by a landslide, I tell them, “the people must have  remembered and told their sons and daughters how calming it was after those chaotic years of lawlessness… licensed from the banner of “democracy”.

(Noralyn Onto Dudt originally wrote this piece for the international community. It has been translated to German and Japanese and a Korean translation is ongoing. After consulting The Ilocos Times managing editor Mitch Esmino, she was advised to tweak it a bit for the readers of The Ilocos Times.)