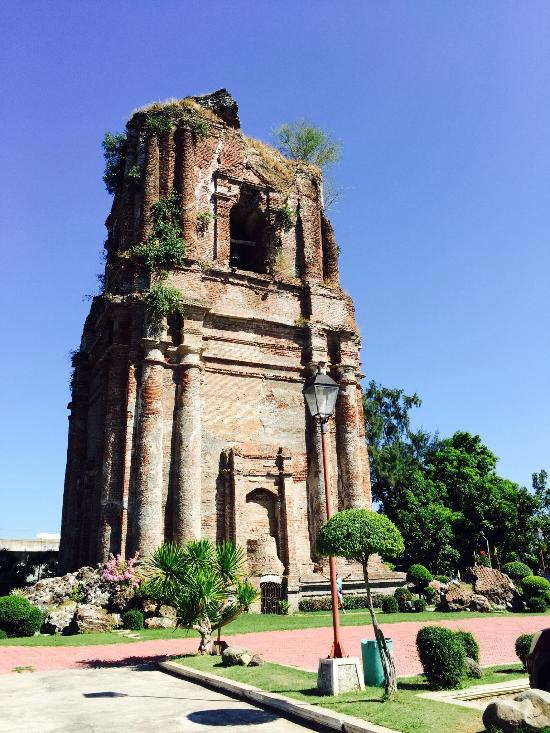 THE AUGUSTINIAN friars  must have been a very dedicated group of apostles. Such dedication is exhibited in the  still standing churches of the Ilocos region. The friars would build a church in one town and then use that as a center for evangelization of the surrounding area.  Visitas or peripheral missions they were called. The church in Bacarra was such a center –to reach the most  northwestern tip of Luzon Island : Bangui, Burgos,  Vintar. Pasuquin, Adang ( the current Adams) Banban ( now a barrio of Bangui) and Vera ( its new name unknown). The Batac church served as the center of the Visita to Dingras and Paoay. While the San Agustin Church in Paoay has been completely rebuilt and had made it to the World Heritage List,  it took some time to convince and motivate others to help with renovating the seriously-damaged  St. Joseph Church of Dingras.

My good friend and former dorm mate Evita Castro de Alban wrote a piece about the St.Joseph Church of Dingras:

“The Parish of St. Joseph was founded by the Augustinian friars in 1598. The baroque church, 90 feet long and 20 feet wide and one of the biggest in the country was built with red bricks. It was repeatedly damaged by earthquakes and a fire that was caused by lightning between 1619 and 1838. A 1913 earthquake was so devastating that the parishioners deemed  it not worth rebuilding and  became known as the Dingras Ruins. Attempts to restore it was initiated by Rev. Arthur Laigo Albano, a Dingrenio parish priest in California urging St. Joseph parishioners in the United States to help restore their hometown church. Joseph Albano from the West Coast and Dr. Roger Valencia in the East Coast teamed up in uniting the Dingrenios in the United States for the restoration project. Unfortunately,  it could not be expedited as quickly as they wished. This prompted the town mayor to  reach out to the most prominent parishioner Ester Albano Garcia who was president of one of the biggest private universities in the country, and informed her that the facade of the church was so damaged that he had to order the church be closed. It was an order that was seriously taken and Ms. Garcia began to organize the parishioners to set up the  St. Joseph of Dingras Foundation Inc. with Marianne Rosales Gancayco as president.  Restoration went full blast and after more than a century in its ruinous state, the St. Joseph Parish Church was ready to be celebrated. In the Year of St. Joseph, it was declared a pilgrim site for the 500 years celebration of Christianity in the Philippines. The Porta Sancta was opened on March 19, 2021 by His Excellency Renato Mayugba DD, Bishop of the Diocese of Laoag.”

In 1973, the late President Ferdinand E. Marcos Sr. declared the San Andres Apostol Parish Church of Bacarra a “National Cultural Treasure” through Presidential Decree260. The town of Bacarra became a visita of Laoag in 1603 and became an independent parish in 1614. A new church on the site was inaugurated by the Augustinians in 1782. Right next to the Church is the “celebrated” belfry.  I call it celebrated because of its special feature that is popular among tourists. Recurring earthquakes  have caused the  dome to start  leaning and stayed that way until a 7.8- magnitude quake in 1983 toppled it completely.

North of Bacarra is the town of Pasuquin. Between the St. James Academy and the New St. James Parish Church are the “remains” of the old St. James Church that was built in 1784 and damaged by the September 9, 1896 earthquake. It was never reconstructed and the 1931 earthquake totally destroyed the facade. It was demolished between 1940 and 1950.

The Ilocos region particularly Ilocos Norte and Ilocos Sur are filled with these treasures. That two of them have been designated as World Heritage sites has been quite an honor and a beautiful legacy of  those Ilocanos who toiled under the Augustinian friars. It was no surprise that both the San Agustin Church of Paoay and the Nuestra Senora de la Asuncion Church of Santa Maria could easily meet two of the criteria for a World Heritage site: (a) an outstanding example of a type of building, architectural or technological ensemble or landscape which illustrate a significant stage in history  (b) to exhibit an important interchange of human values, over a span of time or within a cultural area of the world,  on development in architecture or technology,  monumental arts, town planning or landscape design.

One wonders whether the  renovated church in  Dingras could also be nominated to the World Heritage List as it also features a monumental shape and an enormous appearance which  “exhibits an important interchange of human values,  over a span of time and within a cultural area of the world.” Having said that, the ruined church in Pasuquin if it were rebuilt and refurbished would easily be considered a World Heritage site. It would bring the ancient past back to life.

This article would not have been possible without the information and photos provided by my dear friend  Evita Castro de Alban; Father Ericson Josue; Tariff Commissioner Ernesto Albano; and Engr. Alfred Ian Menor. My deepest appreciation.